Unlike other years in the Netherlands, November and December months were relatively warm for this time of year when temperatures above 0 ° C. As I went here for my job interview in December 2010 was all covered with snow and very cold.

The old saying here that when the months of November and December are hot, or not so cold that January and February are very strict. Apparently they were right, it snowed in February and the temperatures reached -15 ° C, where the average was, and is -5 ° C.

The radio does not speak of anything other than a famous race on ice skates on the frozen lakes in Friesland what happens. This race runs through several cities, about 200km in total.

The last occurred in the 90s, I think in 1996 and every year the Dutch go very anxious to see if this is the race happens again, unfortunately it seems that this was not because the channels are not frozen enough.

This test is no joke, got to be people who came to an end with frozen fingers. Here’s some pictures of this race:

All lakes and canals are frozen right now and it is nice to see the canals with boats and people all frozen ice skating, riding chairs, eating and drinking on the frozen lake.

I went to Amsterdam to visit some friends this weekend and that was an uproar because of the frozen lakes, here are some pictures as well: 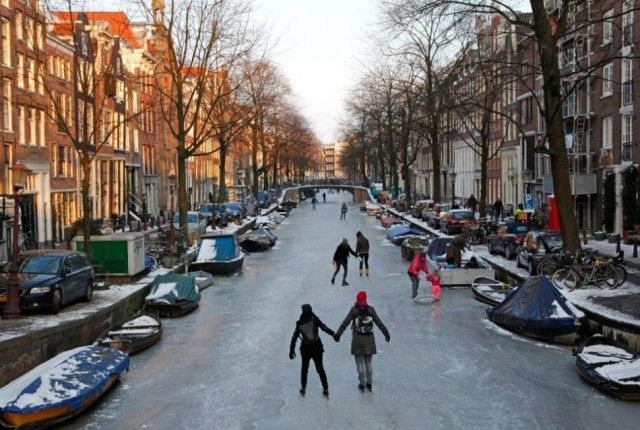 The temperature will now rise to positive values​​, was a sample of winter here and my first. Now there comes the rain and I’m used to it.

I am a first-time mother of an 18 months old outstanding boy who insists on not having any sort of fixed sleeping schedules. I am a researcher, writer, animal lover, philanthropist, chef, and full-time mum. Having had such a hard time myself with this new role my goal is for every mother to feel they have someone to talk to and to share thoughts, worries, events. From my heart to yours, here s how i dealt and continue to deal with this beautiful miracle called motherhood.